Here’s another summer favorite — kicked up a notch — from my boyfriend Tyler Florence. The pickles and capers, plus a healthy dose of Dijon mustard, make this potato salad AHH-mazing. It’s just the right amount of sour and salty — by far the best potato salad I’ve ever had. I’ve made this a bunch of times for cookouts and it gets tons of compliments. 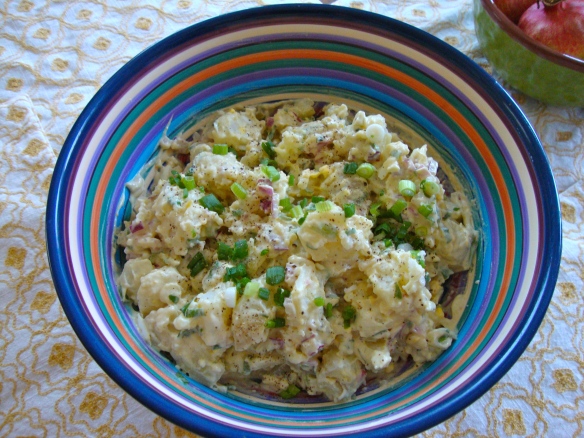 I made this the other night for a cookout at my best friend Melissa’s house. Her husband Jason was just back from a dove hunting trip (that’s right, dove) and he was grilling it up. It sounds weird and horrible but it was actually quite good — you just have to get beyond the whole dove thing. And no, they’re not the white doves you release at weddings. (As my dad said, “Tell him he’s heartless!”)

Jason skewered the dove with a piece of pineapple and wrapped it in turkey bacon, and grilled it up with some peppers and onions. Another one he wrapped up with a pepperocini. Not bad at all! And the potato salad was a nice little accompaniment.

Directions
Put the potatoes and eggs into a big saucepan of cold salted water. Bring to a simmer. After 12 minutes remove the eggs with a slotted spoon and let cool. Continue cooking the potatoes until a paring knife poked into them goes in without resistance, about 3 minutes longer. Drain the potatoes in a colander and let them cool.

Reserve some scallion greens and capers for garnish. Meanwhile, stir together the mayonnaise, mustard, pickles and their juice, onion, remaining scallions and capers, parsley, and lemon juice in a bowl large enough to hold the potatoes. Peel the cool eggs and grate them into the bowl. Stick a fork into the potatoes and lift them 1 at a time out of the colander. Break up the potatoes by hand into rough chunks, add them to the bowl and toss to coat with the dressing. Season, to taste, with salt and pepper. Drizzle with a little olive oil before serving.