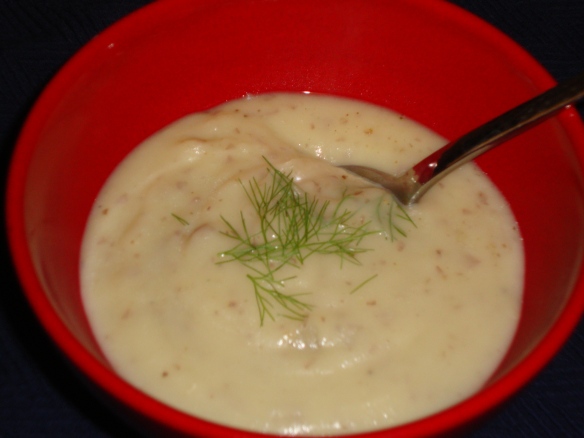 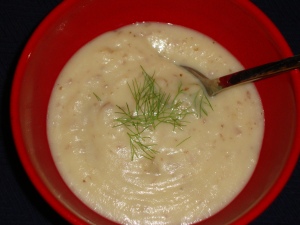 I’ve been in a soup mood lately, and I had some leftover potatoes from my parents’ visit that I had no idea what to do with (I don’t each much potato), and so…potato soup it was. It was also a cold, dreary day, which made this recipe from Barefoot Contessa sound very homey and warm and delicious.

And it was! The soup came out creamy and thick, with a ton of great potato flavor. You keep the skins on the potatoes (makes it super easy), and get such a nice earthy taste from it. And the roasting does good things for the flavor, opposed to the old boiling route. Note: this is NOT your typical cheesy potato soup that doesn’t even taste like potato. And I think that’s a good thing…even though I’ve never seen a cheese I didn’t like. It really tastes like potato soup — and while it’s filling and creamy, you don’t feel like you ate a block of cheese afterward. Which is always nice.

I love fennel, and in this recipe, it gives the soup a nice flavor undertone — not licorice-y at all, just a good contrast. I’d serve this by the cup (opposed to by the bowl) since it is pretty rich. It’d be perfect with a nice salad or alongside half a sandwich for lunch.

Ingredients (I halved the recipe)

Preheat oven to 400°F. In a large bowl, toss the potatoes with 1/4 cup olive oil, garlic, salt, and pepper. Spread on a baking sheet and roast for 30 minutes, until cooked through.

Saute the chopped onions and chopped fennel with 2 tablespoons olive oil in a large stockpot on medium heat until translucent, 10 to 15 minutes. Add the roasted potatoes (including scrapings from the pan) and the stock. Cover and bring to a boil. Lower the heat and simmer uncovered for 1 hour, until all the vegetables are very soft. Add the heavy cream and allow the soup to cool slightly.

Puree the soup in batches in a food processor or food mill, leaving some chunks. Taste for salt and pepper. Reheat and serve hot.