What makes these “New England” you ask? As a New Hampshire native, I say that’s an excellent question. And I have no idea. (The apple? Cheddar? Eh. Weak.) Despite that, they were very tasty and you should make them.

It’s no secret that I’m a sandwich girl. Sandwiches, burgers, melts, paninis — you name it, I love it. They’re so easy — everything is right there in one handy little package you can hold in your hand. What’s not to love?

I’ve got some quirks when it comes to sandwiches, though. If it’s a cold sandwich, it has to be made by someone else. I just don’t like cold sandwiches I make myself. I’ll eat them, but I won’t like them. Not so with hot sandwiches, so this one worked out just fine for me. Rachael Ray calls this a “sammie” — in my opinion, there’s not much that’s more annoying than that word. Nails on a chalkboard. So let’s just call it a sandwich, shall we? Okay then. 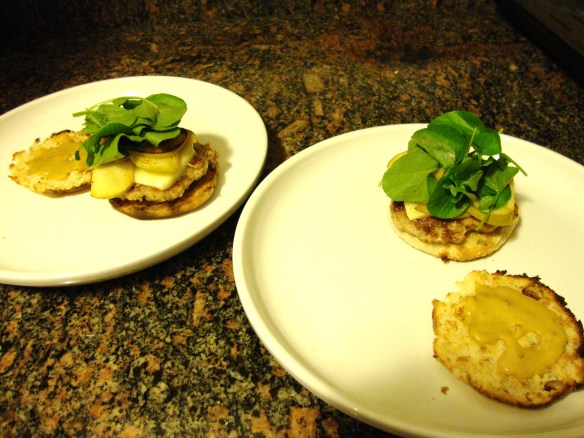 In bowl, mix chicken with salt, pepper and poultry seasoning. Form 4 thin patties. Preheat one large and one medium sized skillet over medium-high heat. Add about 2 tablespoons of EVOO, twice around the pan, to each skillet. Place chicken patties in large skillet and cook for 5-8 minutes on each side (or until cooked through).

Meanwhile, add apples and onions to second skillet, season with salt and pepper and cook until tender, 6-7 minutes.

Place a chicken patty on each English muffin bottom and top with some of the apple/onion mixture and a slice of cheese. Slide them under the broiler for a minute or two to melt the cheese. Spread each muffin top with a tablespoon of honey mustard. Top the chicken patties with a handful of watercress, set the muffin tops in place, and serve with a few chips. 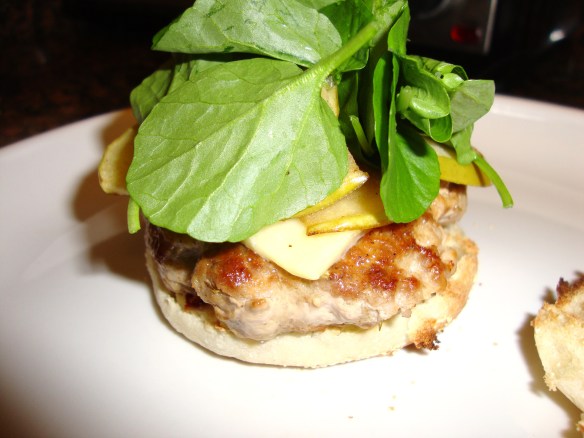